Monika Rzezniczek: “I wish I could just hurry across the field and past the fountain”

Monika Rzezniczek taught English Language and Literature at ACS from 1999 to 2001. While at ACS, she was actively involved in the school community among others by being the choreographer and set designer for the musical performances and teaching the Women’s Circle elective class. It was a picture taken during that very class that drew our attention to Ms. Rzezniczek and made us want to find out what she has been up to and what ACS memories she keeps.

As I think back to the time I spent at ACS, I can hardly believe that it was over a decade ago. Is it possible for something to feel like it happened a lifetime ago, but only yesterday at the same time? I lived at Pink House with Julie Ham and Darlene Frketich and it really felt like we lived a fairytale life in a gingerbread house. I loved living there so much that I stayed both summers so I could enjoy the beauty and serenity of the campus year-round. When I am blissfully transported back in time, I recall that twelve years ago I used to wake up early on Saturday mornings to the sound of birds chirping melodies outside my bedroom window. In summertime, I might lie in the hammock outside in the garden and be swept away by a new novel, lazily enjoying the solitude and the beauty of the orchard surrounding Pink House. I could hike and visit with my ancient, stoic friend Vitosha. Possibly I would take bus 76 downtown and window shop on Vitoshka or browse for a new treasure like a pocket watch or painted saint in front of Alexander Nevsky Cathedral. I might tempt one of my housemates to join me for a weekend getaway to Melnik. In the summer we would spend our holidays travelling to Varna and Nessebar, take a train to Istanbul, or rent a car and drive to Greece.

During the school year, on weekdays, I hurried across the field past the fountain and into Sanders Hall to say ‘hello’ to my colleagues. I would head over to Ostrander Hall and race to my classroom on the second floor to anxiously await the arrival of my students. I might spend the morning reading poetry, or To Kill a Mockingbird with my Grade 9 students, acting out new English vocabulary like a professional at charades. In the afternoon my grade 12 students, having mastered English in a few short years, would join me on an adventure through American history with Huck Finn. I knew even then, as a young teacher at the start of my career, that these students were special. They were intelligent and thoughtful – yes; but most importantly they were enthusiastic and engaged in learning. These students would shape tomorrow’s world, and I felt so fortunate to spend my days in their company. I wonder if they knew that I cherished every moment I devoted to them. I especially enjoyed electives and extra curricular activities because there I could really get to know my students. I remember warm and sunny afternoons in the spring spent at the Fountain during the Women’s Studies elective, populated by both boys and girls engaged in discussions about feminist literature. 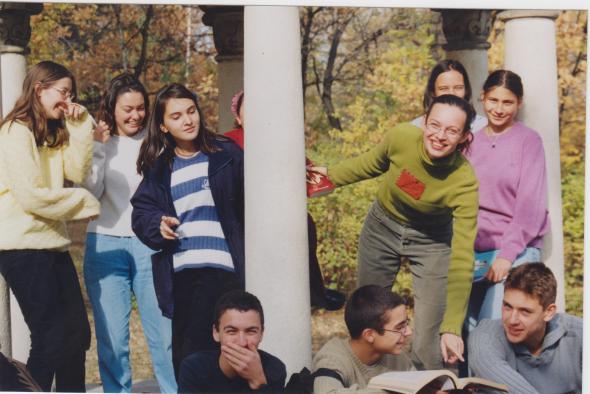 I think the most exciting moments, though, happened in the Auditorium. I recall long rehearsals for Fiddler on the Roof and West Side Story in Whitaker Auditorium and the magical performances that followed those endless rehearsals when the choreography finally came together and the students sang and performed beautifully. Ah, but first I had to rebuild the entire Fiddler on the Roof set from wood a week before the show, because it was lovingly but unfortunately welded from iron by the maintenance staff who did not understand my Bulgarian when I tried to convey that the set pieces had to be moveable. Maribeth Milkowski directed, Nancy Keech was the Stage Manager, and I choreographed and designed the sets for both musicals.

For West Side Story, when we teamed-up again, and this time Nancy Keech directed, we decided on a permanent set made from the scaffolding already on campus due to the extensive renovations planned for the school buildings. At least this would save us from a comical weekend trip to the local lumberyard in the school van and having to gesticulate that we would need a lot of two-by-fours. 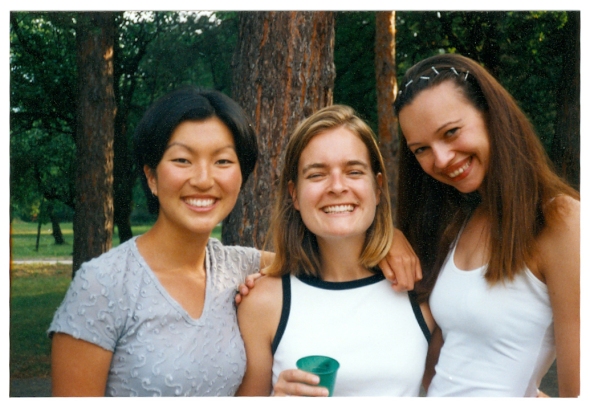 I’m sure these side trips provided some comical relief in the administration office, especially for Maria Angelova or President Perske, when we relayed our stories in great detail on the following Monday morning. Maria loved the model I made of the set (to convince her to let us use the scaffolding I built a model out of straws for her). I could not find any gels for the lamps so I made it my mission to find some when I visited a friend in Oxford. That year our lamps would not be naked, and we had cool and warm scenes – not just a spotlight. Of course in the end all that mattered were the shining stars on stage. Who could forget Mila Boyadieva’s Golde or (the late) Pavel Hristov’s Tevye[1]? The following year Petia Dikova ’03 and Vladimir Nedkov ’02 were moving as star-crossed lovers, and the entire cast danced brilliantly.

It seems like yesterday when I think of it, but this was a long time ago – before supermarkets that carried Cheddar cheese came to Mladost, when the closest restaurant was a Chinese one in Mladost 2, and the next closest was Troll Pizza, a few bus stops away. We could buy a kilo of peppers for 1 leva at the local market and supplement that with some overpriced imported frozen food at Shell station, a short walk from campus. Those were days filled with adventures I will never forget.

The evenings were fun-filled, as well. There were Bulgarian folk dancing classes to attend thanks to Stoyan Karadjov, and Bulgarian language classes to muddle through thanks to the very patient Bulgarian language teachers. There were staff socials that lasted well into the night because Roumyana Ivanova from the ESL department kept us dancing, and Vlado Marinov kept us singing famous Bulgarian ballads under the moonlight. My time in Bulgaria was greatly enriched by the Bulgarian staff members who lovingly and open-heartedly accepted us and hosted us so graciously. Their generosity will never be forgotten and I often think of them fondly, wishing to return, and reminisce.

With daughter Maya and son Liam

I left ACS in 2001 reluctantly. Nonetheless, I knew it was time to go for I had fallen hopelessly in love. David and I are now married and have two children. We lived in Toronto for many years but we have recently moved to a quiet rural town north of the city. I wish I could just hurry across the field and past the fountain – instead, I must drive almost an hour to get to my school. I still race to my classroom because I am just as enthusiastic about teaching and coincidentally I will be starting To Kill a Mockingbird with my Grade 9 English students next week. I still wake up early on Saturdays but my days of lying in a hammock are a distant memory. Usually my daughter Maya, who is four, has other plans for me. I spend my Saturday mornings with my husband watching both children at Gymnastics class, and then swimming classes in the afternoon. Liam, who is six, will then want to play chess or take turns reading a novel together.

While I do not have time to choreograph a musical or design a set for a school play right now, I get to sing and dance with two very talented performers all the time – the living room is our stage and we use the couch cushions to build our set. Still, no matter how different my life is now, ACS will be a part of me forever. I lovingly display my treasures from Alexander Nevsky market around my home. There are painted boxes in my bedroom, Bulgarian dolls in the playroom, and a beautiful icon of St. George hanging in the hallway. I have cast pictures and programs from both musicals framed as well as the most cherished certificate I have ever received: Most Enthusiastic Teacher from the graduating class of 2001. Also, I have woven some Bulgarian traditions into my life. On my birthday I bring a box of chocolates for my colleagues at work and on the first of March I wish everyone “Chestita Baba Marta!” Luckily, over the years students have contacted me to let me know how they are doing, so I have been able to keep in touch with ACS through their stories. I wish I could embrace all of the students I had the privilege to teach while I was at ACS.  Perhaps I will be lucky enough to visit one day, when there is a reunion. Until then, the memories and the pictures will have to console me.

Iain McClinton: The Art of Learning »
« Ivana, Misho, and Tsveta ’16 on FISSION: Critical Thinking and Team Work – That’s What Science Is All About