Kalinde Webb and Bill Fisher: Bulgaria on Our Mind

Kalinde Webb and Bill Fisher came to ACS in 1993 and stayed till 1999. Each of them played an important role in the life of ACS students during those six years by taking on numerous roles in the school. Both Kalinde and Bill taught English Language and Literature and served on Faculty Council; she was the Chair of the English Department and in 1996 he became the first full-time ACS Dean of Students. He was the advisor of several years for the student newspaper College Life as well, and she impressed nation-wide with her devotion and talent in Bulgarian folk dances. At alumni request, we turned to them and asked about their memories from ACS and their life afterwards.

It’s been ten years since we left Sofia in August of 1999, and it’s hard to look back over that time and think it was so long ago. We came to Sofia two years after our wedding, and spent six years defining our marriage and ourselves there and through travels around the country and Europe.

When we first spoke with Dr. Whitaker about the job at a recruiting fair in Orlando, Florida, in February of 1993, Kalinde was thrilled to hear that she would have only 100 students, one third fewer than she had in Oxford, Ohio. But as she quickly found out, where about two thirds of her students at Talawanda High School would write their assignments, all of the ACS students did, and they wrote more than they were asked. The energy, and volume, of those fifteen-year-old Bulgarians caught both of us by surprise, but it also led to active and fun (and exhausting) Green School experiences of softball, drama, classes, and orienteering in Kovachevtsi, Kostenets, and Panichiste. 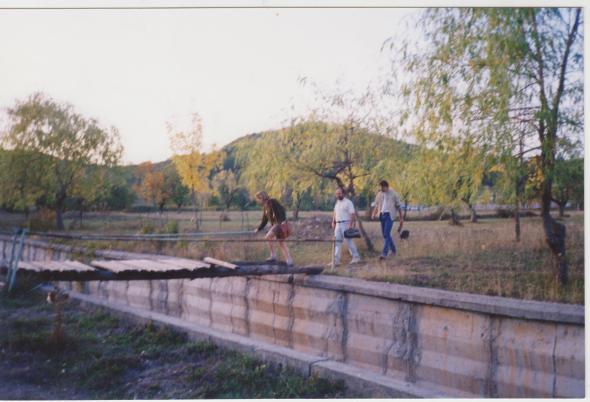 Working at the College so early in our lives together did much to define how we see things. The two of us being the entire English Department in 1993-94 was a bit odd, but it allowed us to get to know the students better than we could later in our time at ACS as we discussed classes and students often; we would find ourselves wondering about a student and whether any cultural differences between America and Bulgaria might account for certain behavior or responses in their essays, or if that student was just expressing him or herself as an individual. We did have a number of disagreements, but Kalinde was chair, so….

At times those disagreements showed up in Faculty Council. Kalinde served on the first Faculty Council in 1993-94, and Bill joined later in 1994-95 and was chair of the committee from 1996-99 as Dean of Students. While the Council was formed to supply advice to first Dr. Whitaker and then Dr. Charles, it quickly became, as far the students were concerned, the end of the line regarding behavioral and academic disciplinary matters. Every semester seemed to bring in another odd event, peculiar explanations, and numerous cases of cheating. Tears, arguing, considering the broader effect of the Council’s decisions on students’ lives took up much more time than anyone probably ever thought it would. Keeping up on who was on one kind of probation or another, and the specific details Faculty Council created for each probationary case, was something of a headache. And while some students eventually found themselves dismissed from the College, others, like Vasil Topuzov ’99, quickly turned around and became shining stars.

We certainly share better memories, the most important of which has to be the birth of Emma Claire at Sheinovo hospital on a very snowy evening in March. Our ‘malka blondinka’ is now ten and seems to be three meters tall. If she gets her math skills down, she might have a chance at the entrance exam for the College in 2013. Our other daughter, Katya Eleanor, was born in Oxford in 2003. Both have been to Sofia (and Istanbul) on our two trips back to Bulgaria in 2002 and 2007.

We also recall with much fondness the warmth and hospitality of the Bulgarian teachers. The Easter trip to Vanya Angelova’s village of Shivachevo was a joy of smashing eggs together and eating (and eating, and eating). Being at Vanya Dimova’s home and talking politics, at Bozhana Chakalova’s and talking politics, at Maria Angelova’s and talking about everything, all these joyous occasions taught us much about the grace of Bulgarians. Eating out at the local cafes and pizza joints with the American (and Canadian, and the odd English) teachers helped defuse the day with a bottle of Zagorka and maybe a cold glass of rakiya, with ‘sirene po shopski’ i ‘kartofki sas sirene’.

One of our sharpest memories would be the Liberation Day Holiday in 1994, traveling the country with Lee Cunningham and Kathryn Davis, taking in Plovdiv, Gabrovo, Veliko Turnovo, and Trojan Monastery. The last was so impressive, we had Emma baptized there the day after graduation in May of 1999.

There were also disappointments. The wish to see certain students make it to universities in the States could end in sadness. A couple of presidents of Student Council who we knew to be unique, hard working, if opinionated, students did not make it and could have done so well. One wonders what else could have been said or done to help their applications.

We could go on and on about the time we spent in Bulgaria, and perhaps we left too soon, seeing how great a place the campus is for a little girl to grow up in. But we did come back home and fell back into our alternative lives here, awkward as it was for a while. The College intruded itself into our minds every other minute, it seemed – Bill told his students that, if they ever wanted to get him off track from the lesson plan, just ask about his daughter or Bulgaria.

In the past ten years, our time has been spent creating a home. When we left for Bulgaria, we didn’t own much, and what we did have we sold. When we came back, all we had were Turkish rugs and clothes. So we have bought a house, filled some of it with furniture, and the girls have filled the rest with stuffed animals and other toys. As Kalinde and Bill have taken up their musical instruments of trombone and tuba again for the local community band and a brass quintet, we’ve added a room in order to handle the instruments, their cases, and the piano. We play at churches as well as small concerts at old age homes and special events.

Kalinde has kept up her running, tackling marathons from Boston to the mountains of California, though more recently she has shortened her distances (or risk losing her knees). She has co-written a young adult book with her father and continues to take classes at Miami University when she can in order to keep up with her Honors American Literature students and her role as the Talawanda High School English Department Chair. And, of course, she is as beautiful as ever.

Bill teaches half time at Miami University and, in his first year had the unique and unexpected pleasure of teaching Milena Staneva, a student he had also taught in eighth class at ACS. The girls had the great joy last year of being flower girls at Milena’s wedding in Washington, DC. When not cooking or taking care of the house, gardening or making sure we don’t go broke, he works on a number of committees at our church. He is currently chair of the endowment committee, which has no end of headaches in developing new by-laws, investment policies, and keeping the church’s trustees from getting too nervous. 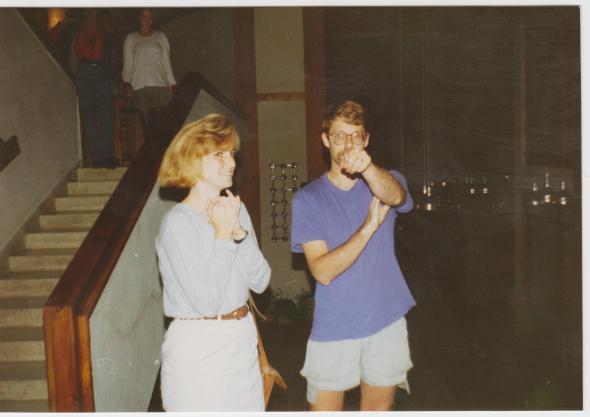 Our daughters are noisily insane. We have had to create a rule that says no singing at the dinner table just so they will actually eat something. Both love school and do wonderfully at reading and making friends – Katya has four boyfriends, but seems a little unsure of just what that means. Unlike many Americans, we are fortunate to have two sets of grandparents in our town, the girls enjoy them to no end, and to stay sane, we need them to spend some time out of our house.

It has been important for us to have the girls, especially Emma, visit Bulgaria, and her godmother (Maria Angelova) and we will come back again, no matter how traffic-clogged and crazy Sofia gets.

This material was first published in June 2009 as part of the first issue of the ACS Alumni Magazine. And here is a short update from Bill Fisher (2016):

We have changed, however. Some of us are taller, for example. Some are thinner. Some don’t have cell phones, some don’t care to. But we certainly have the fondest memories of what is the most important time of our lives together.

And here the link to Kalinde Webb’s Harry Potter fan-fiction tale, The Clarissa Black Effect, the plot-line to which is partially inspired by her stay at ACS. Enjoy!