When Sanders Hall Was Art Central: Arts Fest’s Premiere in 1995

It was the toughest period after the fall of communism. It was the time of Jean Videnov’s socialist government, when electricity and water were rationed, banks went bankrupt, people’s savings were lost; hyperinflation and social unrest ran rampant. “Bulgaria was in an incredibly difficult situation, and so was the College,” Nia Decheva says.

Nia started working as an art teacher at the American College of Sofia in 1994, and with the start of that academic year, she also became head of the Arts Department. 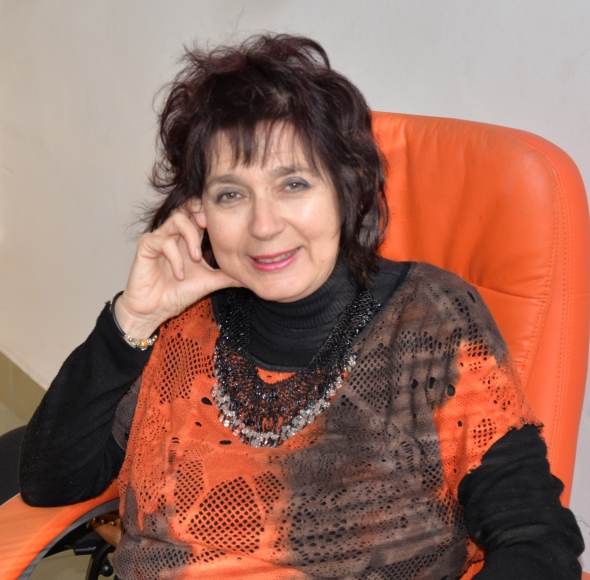 “There were no cafes in Sofia back then, there was nothing, I don’t think there was even a McDonald’s yet. (The first McDonald’s in Sofia opened in 1995 in Slaveykov Sq.) Out this way, it was a dark zone: there were no buildings, there was absolutely nothing, only roaming stray dogs. There were thorn-bushes, one could not pass. We all gathered in Sanders: all the classes and all teachers were there. I taught in Rm. 303 on the third floor.”

In the Austrian Confectionery on Tsar Osvoboditel Blvd., Sandy Charles proposed this brave idea to Nia: “What do you say we do an Arts Fest?”

Sandra “Sandy” Charles was the wife of then-president Arthur Charles and worked as a pro-bono PR for the American College of Sofia.

She recalls: “The intimidating presence of Mevrey (МВР, the Ministry of the Interior) on the campus during the post WWII era until ACS reopened in 1992 made the campus off limits to everyone. We wanted students to feel a sense of ownership, as well as parents and the public to feel welcome on the campus, and most especially the remaining alumni to be free to visit their beloved alma mater. An open-house event like the Arts Fest when all of the public was invited in provided an opportunity for people to come in numbers and, we hoped, feel relaxed about coming on campus and possibly have some fun in the bargain.” 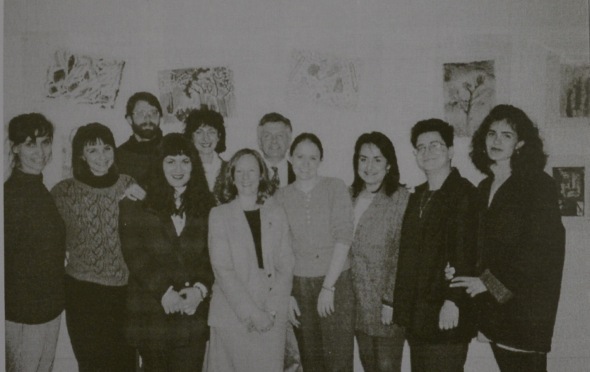 ACS admin staff in 1996, Arthur and Sandy Charles in the middle

The image and philosophy they wanted to convey to Bulgarian people was openness. “She wanted to show the College’s proper place in the cultural society of Sofia,” Nia understood in that first meeting.

The idea was to exhibit Bulgarian artists in Sanders Hall.

Sandy knew that an event of the size she wanted it to be would need long-range planning. Mustering resources, arranging logistics, advertising and most of all, selling the idea to parents, students, teachers and persuading artists to participate.

Sandy turned to Nia because she was a renowned author herself. She was very active at the time, frequently exhibiting and functioning in the thick of things. As she put it, “I know everybody and everybody knows me.” 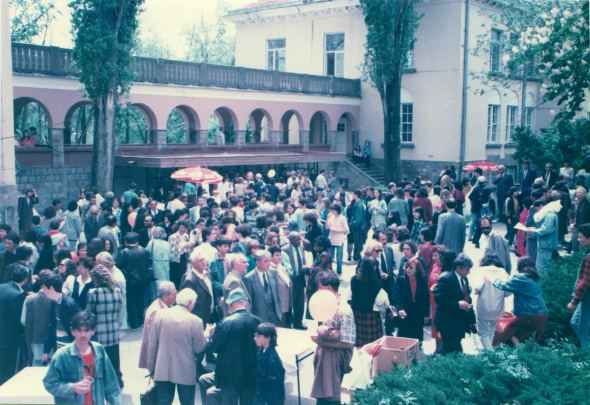 Sandy wanted Nia to invite whoever she felt would be appropriate to participate in an exhibition. The idea was to promote the College – to spread the word that it was being active in the city, to have its name heard more and more, and have it connected to the cultural life of Sofia. “It was an incredible idea, very much revolutionary,” Nia says. “And so I got on with it.”

She called preeminent artist Svetlin Rusev, former Chairman of the Union of Bulgarian Artists (1973-85), the only painter member of the Bulgarian Academy of Sciences, a great public figure and household name to this day. He wholeheartedly embraced the idea. His endorsement was a significant achievement, and when the press reported the event the main focus was on “Svetlin Rusev exhibiting in the American College.”

“I went to his studio,” Nia recalls. “He gave to the College two works that I picked up still dripping. The price was $2000 which was high. They were quite large, at least 50 cm by 70 cm. He said that if we sold them all the money would go to the College. He said, You know that they’re lining up at my studio for these works. He sells everything.” 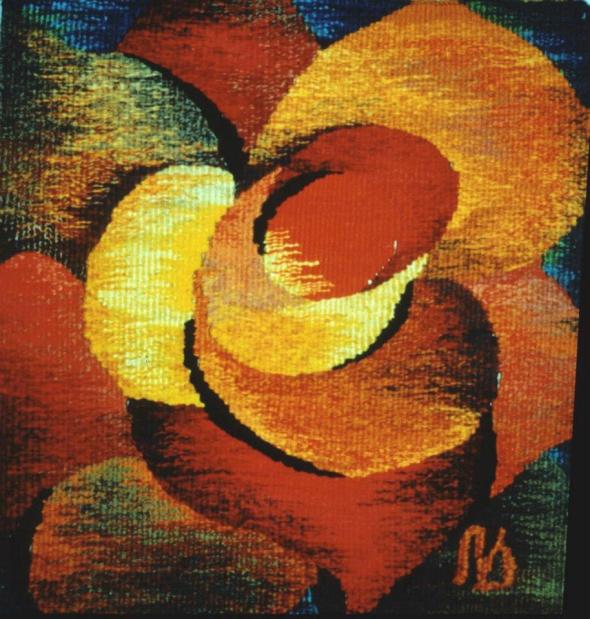 Then Nia rushed over to sculptor Georgi Chapkanov who had a studio on the same street. He also gave a number of works to be sold at the exhibit with a percentage of the profits to go to the College.

The other star artist to participate was painter Gredi Assa. The rest who took part were Nia Decheva herself who exhibited textile art, her colleagues Dobrin Peychev and Natalia Himirska, who was the first art teacher at ACS in 1992, and Valentin Stefanoff who lives in Paris and creates black-and-white drawings.

“With these artists we wanted to attract the public’s attention,” Nia says. “Because where they go cameramen and journalists follow. Our goal was to draw attention to the College, and we succeeded.”

“I remember that Svetlin was very keen on seeing where his works were displayed,” she relates. “So I picked him up on Saturday, and he came to the College to see them. I’ll never forget how in those days nothing on campus was ever locked. There was nobody, it was deserted for the weekend. I showed him Room 303 where the art studio was. Downstairs, he saw the exhibition that we had arranged in the Art Gallery. The entire Arts Fest was in those two rooms. Everywhere was unlocked – I even showed him the office of the president, because Arthur Charles kept a little exhibit of student art. I wanted to show him what the students were doing.”

And when the day came – May 14, 1995 – the success exceeded the organizers’ expectations. The turnout was great, the emotions ran high, and the wave of publicity was strong. 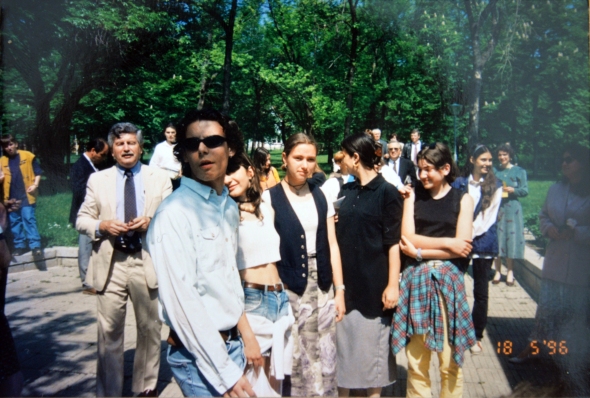 “What Arts Fest is now is what we came up with back then,” Nia says. “There was always a talent show but it used to happen at the Fountain. There was always a musical program but it would take place in Ostrander, which was Main then. There have always been games, raffle draw. Myself and the computer department made the tickets and invitations. The raffle tickets sold for 50 stotinki, which later became a lev. That was Sandy’s idea, selling everything for coupons. It was a novel practice for me.”

Then-president Arthur Charles wrote: “Your work and dedication turned Sanders Hall into one of the finest art galleries in the country.”

Sandy admits that absolutely none of it would have happened without Nia’s commitment to the idea: “I could not have done anything on the scale we did without her. It was she who got artists involved and interested in exhibiting their art, took me to radio and TV stations to pique their interest, and in general guided me every step of the way with cheer, a can-do attitude, ideas, and solutions to problems.”

“Furthermore, exhibiting at the American College at the time was somewhat risky, because we were still teetering on the edge,” Nia adds. “The period of Jean Videnov was a frightful time in Bulgaria.”

Apart from a work by Valentin Stefanoff there were no sales. A couple of prominent art patrons from the business elite didn’t come through. But the event had an irrevocable PR effect.

Sandy summarizes, “More than an auction, the exhibited art work was a gallery of different styles and mediums to be enjoyed. Another objective was to involve parents in life at the College. We had games, food, and chess tournaments. Parents donated food and beverages, and volunteered time to help run things. Parent volunteering was a new concept and not easily instituted, but in the end, they did it.” 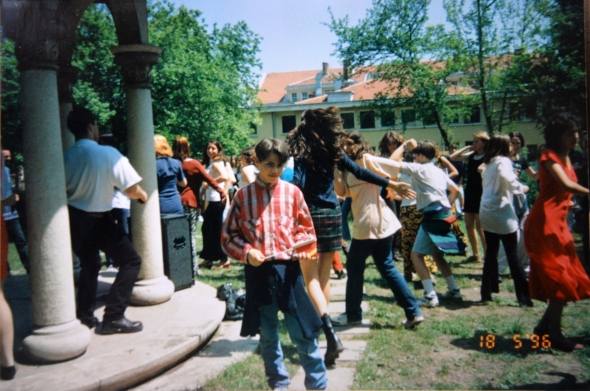 Dancing by the Fountain during ACS Arts Fest, 1996

Since the first Arts Fest, things have changed and developed, while others have become tradition. It has certainly spread beyond Sanders Hall and expanded to feature mostly student art and activities.

Nia says, “I want us to remember Stoyan Karadjov. In this format of Arts Fest, I want to thank Stoyan Karadjov and his horo in front of Sanders that concluded every Arts Fest. He enthused kids and teachers alike with his incredible joie de vivre, with the positive attitude he exuded, with his great professionalism. And I also want to give a shout-out to Vlado Marinov and his rock’n’roll. We had modern dance with Elisaveta Yordanova who is now in New York and has a troupe for modern dance and Bulgarian folk dancing.”

Those are the people who created Arts Fest. It all started with great enthusiasm and love. “Perhaps because we were young,” Nia says. “It was a great time. The people who worked here had faith in everything we did, and we loved each other very much. When one is young and believes, one’s perspective is very different.”

And then, “I thought that Arts Fest would be a flash in the pan. And it stayed. Non-stop, every year. That is the event that the kids are looking forward to. It’s great that we’re giving the arts in the College their due, because it is what makes this college unique. Because we’re not a music school or art school or ballet school, and we’re exhibiting great levels of skill.” 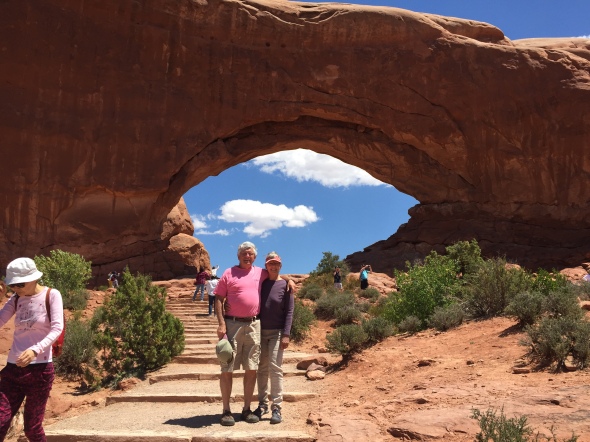 The Charles’s at the Arches National Park Utah, 2017

At the time of the first ACS Arts Fest President Charles summarized it best: “It is wonderful to know that so many people could have been so united in their love for the College. Thanks to people like you the College will endure despite the many difficulties it may face on the outside. I am certain that our arts festival will become the benchmark by which all other such events will be measured in the future.”