Kosara Tsoneva ’17: Always on the Go

Kosara has been involved in every ACS musical since she joined ACS. She acts, sings, dances and likes math, too. At ACS, she started up the Women Empowerment Club and come summer, she’ll be off to the USA to study business at an Ivy League school. Always smiling, always active, when I ask her to meet me for an interview she seems not to mind in the least adding another appointment to her already busy senior year musical performer schedule. On the last day before spring break, a mere couple of weeks before her last high-school class and her last ACS exam, Kosara has a free 7th period so we meet at Onda. I notice again how graceful she is, fragile on the outside, but as I’m about to find out, fierce and very determined, too. Oh, to be young again! We share a couch at an accidentally empty Art Gallery and talk about Kosara’s ACS, her personality and aspirations.

What are you up to these days?

I have 14 more days of school. I’m pretty excited about graduation but at the same time, I know I’m going to be very sad at Last Bell and at my last musical performance the day before. I play Carmen on opening night.

What’s your current state of mind?

I’m curious about what’s happening in the next couple of months, excited about where I’m going next, sort of nostalgic.

This year’s musical that you are a crucial part of is Fame. In your opinion, does fame give or take more?

It takes more than it gives, probably. In 9th grade I was on Bulgaria’s Got Talent, which was very demanding, and stressful, too, as I had the College at the same time. When you appear on TV, everyone starts making comments about you. At first, I made the mistake to read those comments against my better judgement and my parents’ advice and the mean ones affected me. In the end, the experience made me stronger though. 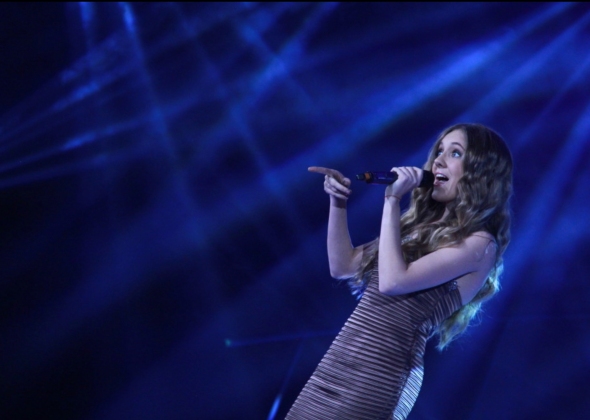 Kosara on Bulgaria’s Got Talent

How did you and your family choose ACS?

It was my decision that my parents supported. I’m originally from Varna, so enrolling at ACS was a pretty big step for the whole family. My mother moved with me while my father stayed in Varna because of his work, coming whenever he could to Sofia. It was totally worth it. I can’t imagine my school years being better. Yes, it was demanding but I like being challenged. I had so many things to do, three days of the week I was coming home after school at 6:30 pm because of the musical and pulling all-nighters.

When do you actually take a break and relax?

I’m one of those people who are just energetic and like to be always on the go, who once that they’ve started with something, want to see it through. Breaks are needed, I take them sometimes, but I get pretty bored (laughing).

You are the founder of the ACS Women Empowerment Club. In your opinion, how do we empower women?

I founded the club in my junior year. We empower women by showing role models, by inviting as our guest-lecturers successful women from sectors not seen as typically female, like Information Technology, Investment Banking, etc. We are actually having the elections for next year’s president and vice—president of the club next week. I’m proud to be leaving something to ACS.

When did you first appear on stage?

It was in a ballroom dancing competition back when I was 5. That was a bitch (laughing). In kindergarten and middle school I was always singing, acting, and dancing. I continued with ballroom dancing; in Varna I was a competitor, training for many hours daily. Here, I had the academics and the musical, plus the whole process of finding a partner who is a good fit for me in a new city. There are many girl dancers, but few guys who don’t quit after just a couple of months of dancing, who stay long enough to actually become better. I dance in the musical though. That’s something I love about the musical – that it combines all my passions in one.

What do you want to be when you grow up?

I haven’t decided yet. That’s probably why I’m pursuing a dual degree. I know I will find my passion in college.

Positivity. I usually try to look on the bright side of things myself, which is why I’m always positive and smiling. You should enjoy what you do, your life.

Who helped you the most to get where you are?

My parents, for sure. They’ve been nothing but supportive, never trying to impose their opinions on me, trusting that whatever I choose would be the best for me.

And my friends, too. My closest friends are the ones who really believe in me and whom I can rely on and share with. When I learned I got accepted to UPenn, Wharton Business School, Huntsman Program (in International Studies and Business), I recall it was December 9 and I was in London, staying with my best friend at her dorm. And when my other close friends in Bulgaria found out, they called me on Face Time all screaming, so happy for me. And I saw how truthful they are, even if the news meant we would be far away from each other come fall, as most of them would be studying in the UK. We’re not too worried though, we know we are going to keep in touch. Plus I’ll be on the East Coast of the US which is a little closer (laughing, looking at the bright side of things again).

Improving myself, bettering myself in whatever I do, fulfilling my intellectual curiosity.

If you could change one thing about yourself what would that be?

I don’t know. It’s me, everyone has good and bad sides. I’m very emotional, so it could be interesting to see how things would be if I weren’t that emotional. 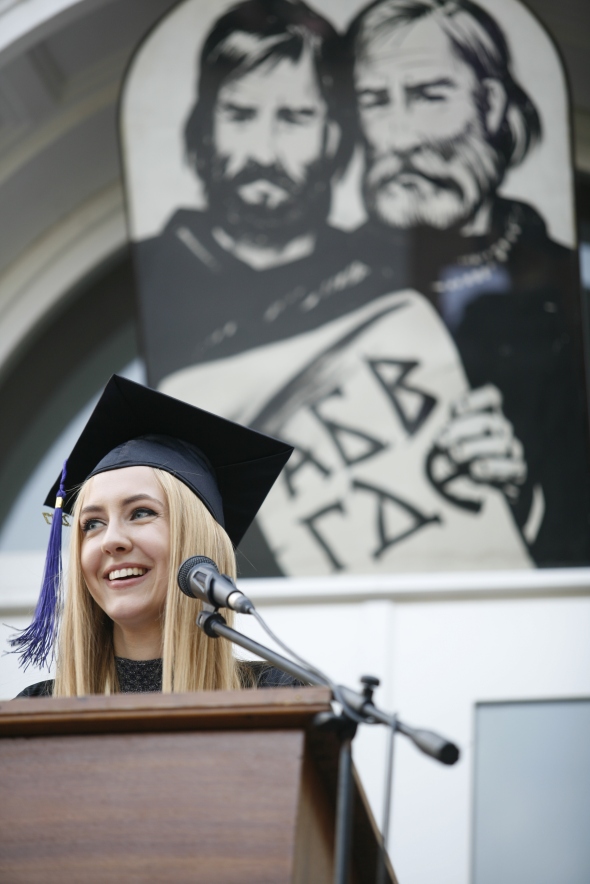 Kosara as the Valedictorian of her class, May 2017

What do you most dislike in people?

What words or phrases do you most overuse?

I’m so excited about this. It’s amazing. Haha. I’m laughing all the time, even at the stupid jokes of my friends. It’s sort of a remedy.

Who are your favorite writers?

Fitzgerald, Alcott, Camus. We were lucky to be studying very interesting books in ELL classes here at ACS. This school year it was plays, Peter Shaffer’s weird but interesting Equus among others.

Who is your hero?

I have fear of death.

Is there anything that you regret?

No, I don’t regret anything.

What’s your idea of perfect happiness?

What was your worst and best year at ACS?

Junior year was the worst. I had to take so many exams for my US university application, on top of the academics here. I had started my application process earlier and was able this way to apply Early Decision to the university I wanted the most. But yes, I was really tired. ACS was very demanding, and I mean all subjects, everyone, and all these extra exams – it was crazy. And also, I had the musical and my club, everything.

At the same time, I couldn’t imagine going to ACS and not going on the musical after school two days a week. Interestingly, most of the people that join the musical in 8th grade stay on until they graduate. Those that join later on often just stay for a year or two.

And the best year, it’s actually two years, 8th and 12th grades. In 8th grade everything was so different, I was so excited about meeting all these new people, seeing this new campus – in my middle school it was just several rooms in one building, shared by a kindergarten, the one I went to, and a middle school; basically I had spent 10 years of my life at this one little place. And then coming to Sofia and to ACS with this huge campus, I was kind of stressed out, lost between the buildings.

And now, the last days in senior year are also very happy days. I just regret I won’t be here to see that new campus center once it’s ready. I’m so jealous of the students who will enjoy it.

What was the most important lesson that you learned here at ACS?

Don’t waste your potential, develop it. Involve yourself in everything that you feel you should because that’s the time to experiment with different things.

What is ACS to you?

My home away from home. That’s how I feel with the relationships that I’ve built with my friends, my teachers, the whole community, my musical director Boris Pankin. I basically feel as if he is my second father. I’ve spent so much time with him working on the musicals; he is so devoted to developing the potential of his students, to his work. With years, teachers change but with the musical, 5 years, so many hours, he was always there.

My eighth grade teacher, Ms. Tsvetkova, stayed very close to my heart, too. In eighth grade, I was sort of almost scared of her; she is an amazing teacher but very demanding, which helped me a lot in 9th grade. 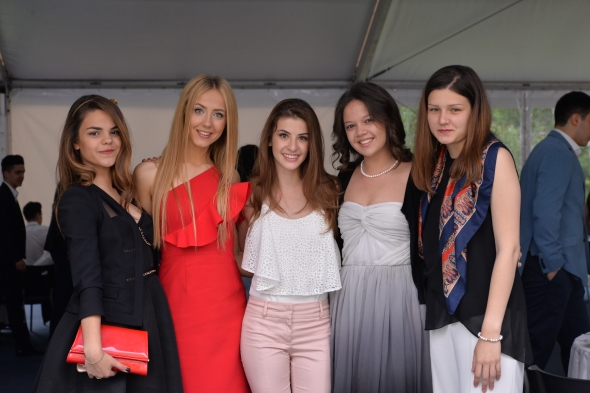 Kosara with friends from her class at their Senior Dinner, May 2017

My classmate ACS alumna and former ACS trustee Lisa Kostova ’97 went to Wharton Business School. Have you two been in contact?

Yeah, she was actually assigned to interview me because she was in the same program as me. She was a tough interviewer, I’m pretty sure I panicked at some point in the interview. But it went well in the end. The Huntsman Program (in International Studies and Business) at UPenn, Wharton Business School was my number one choice both as program and university. Elon Musk and Warren Buffett both went there, both of them great people with great ideas that they realized. And they give back a lot to the community, too, which is inspiring!

Getting into my dream university was amazing! I’m positive it’s going to be so nice there. I hear it’s a small community within a big university, 50 people per year only, sort of exclusive.

Will you join the performing arts there?

I’ll probably stay involved in the performing arts, yes, as a hobby. That’s what I really like about the American university system because, as in ACS, I can join many clubs and still participate in acting. There’s a ballroom dancing club at UPenn. And I’m probably going to join debate as well.

Thank you, Kosara. I look forward to seeing Fame!

And then there’s Last Bell. It’s going to be a really emotional week. I’m going to miss this place!

During her last days as an ACS student, Kosara won both the Arts Program award and the Valedictorian Award, her grade point average for Grade 9-12 being 6.0! Congratulations!

Maria Grozdanova ’18: Happiness Is Perfect in Its Own Way »
« Carl Djerassi, the Courageous